For a few months I’ve been developing a multiplayer game in my spare time. The aim is to create a casual style zombie survival game. It’s still in very early stages. Below is a teaser image I posted a few weeks ago.

Some of the features it currently has:

Below is a preview of running around the world. (Click here for a better version of the gif)

Some of the features in progress:

Below is a preview of the road generation: (I’m just using sphere’s to show the road path, eventually the roads will be their own custom 3D meshes) 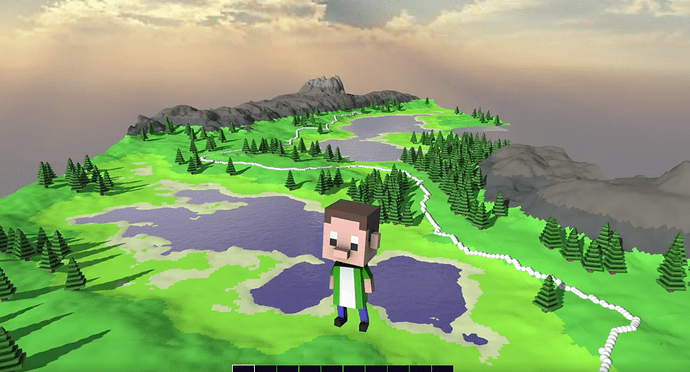 Some of the features planned:

The next gif demonstrates how the inventory works and the drag & drop system: (Click here for a better version of the gif)

It’s not shown in the gif but another feature of the inventory system is when you drag an item onto another they will switch positions.

Overall, this project is not about getting a production level game published or sold, but more about learning where I’m at with game dev and to see how far I can go. (Which is one of the reasons why the scope is so large.) I don’t get much time to work on it usually but it’s pretty fun to develop. There is no preview link I can provide at the moment but maybe one day in the future I’ll try to organise a server stress test. Let me know if you have any questions about it.

I would love to survive in violent colourful world of zombies.

Please, please make a stress tests, so we can all go to link, run & jump around & stuff! Probably will crash server at some point, but hey, don’t hide cool stuff from people.

Many project of similar nature been shared with public on very early stages, and do tend to build community of early adopters and fans of the project vision and want to take part in growing of a cool project.
Think of getting early playable demo, even if it has minimum or none of gameplay, it still can be fun!

Thanks Max! I’d like to get some more core features into the game first - but will definitely look into a public demo soon.

Very swish! Out of interest what are you using for the server backend?

“Ship as early as possible” - tip from many success stories

Thanks! I’m using Node.js for the server and socket.io for server/client communication.

WOW! I have been working on something of my own similar o your topic I would love to get some professional advice m8… Cant wait to play!!!

Hey could you show me how to do the script for infinite terrain generation? thanks

can you send me the link to the game? I wanna play it. it looks intressting

I would like to help I am a map designer. I do designing for free!