It’s very annoying that I have to add collisions to the parts so that I don’t fall through, can you make it automatic, and if the user doesn’t want it, they can just turn it off?

To make it easier, you can group select the entities and add the components to all entities at once.

No, it’s about if you are new to PlayCanvas and would want to know stuff about it!

Edit: This is mostly if you are new and would want to know stuff about PlayCanvas Forums. 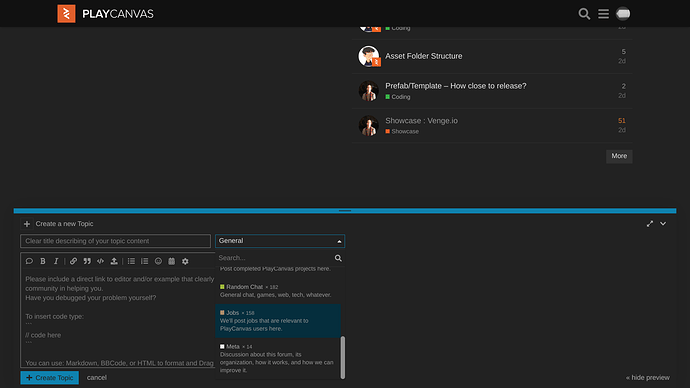 Its for the forums generally. The services such as the Editor, developer documentation etc would be here in Suggestions and Feedback.

I will go ahead and voice disagreement for this suggestion, just in case this actually gets traction.

Just as you think it is annoying to add collision that everything that requires it, it would be equally if not more annoying to remove it for things that don’t.

More importantly, because of how collision is handled by Playcanvas, it would be impractical to automate the process from the beginning. What would the default collider be? A Sphere? A Box? A Capsule? Mesh?

This is a really important thing to ask because collision is one of the most expensive things to calculate in any game engine, not just Playcanvas. Defaulting to a Mesh collider would cause the largest performance issues simply because, as a best practice, you should be using higher poly meshes (especially things like maps) as your colliders. It is better to use several more simple objects to get an acceptable level of realism.

I understand that adding components can seem tedious and boring, but requiring users to put what they need on each entity, rather than assuming what’s needed and often getting it wrong, leads to a much less frustrating experience for more people.

Thinking about it, templates can be a good solution for this. It will allow you to create a base entity that you instance and override into the scene.

First idea was to have a checkbox to enable disable automatic collision and ?rigidbody,

I think current Editor functionality stands somewhere in the neutral area, where it tries to fit the needs of majority. The suggested feature can be a good option for an Editor addon or an extension.