There is a infrequent bug that we have been unable to reproduce on our team where users are unable to delete entities in the scene and will have some error when opening the Editor like this:

This is because there is an extra entity under the parent entity that doesn’t exist.

OR you can do the following:

If you do hit this issue, please do let us know in this thread and any information you can remember of the steps you did to get to this point. Any information will help us find a reproducible case of this issue happening.

6 Likes
[Editor BUG] Random error appears when manipulating with templates
Cannot read properties of undefined (reading 'getGuid')
Bug with scene that breaks it
Corrupted Project?
Can't delete objects inside editor
Corruption in the scene
Editor Missing Entity Troubles
[SOLVED] I can't start the game to test
What is getGuid and how do I fix it?
[SOLVED] Scene Corrupted, Cannot delete anything
[BUG] I can't delete entities on Editor
Cannot read property of 'getGuid' of undefined
I am not able to delete anything from the scene
Undo broke the scene completely
Weird performance issues
yaustar November 24, 2021, 6:39pm #2

Hi, I somehow reproduce this issue in a simple way.

I think you can’t delete any entity after these procedure.

@vaios will be excited to know there’s a repro. Thanks!

We have made a fix to this to stop the original issue from occurring again: https://github.com/playcanvas/editor/releases/tag/v.1.20.5

However, if the project is currently in this broken state, then it will still need these ‘fixes’ to be applied

I have tried these two methods. But the project still fails with the below message.

Did you try the above steps?

I have done that now.

Looking at the version control graph, it doesn’t look like a branch was merged back to master in the steps I’ve listed above 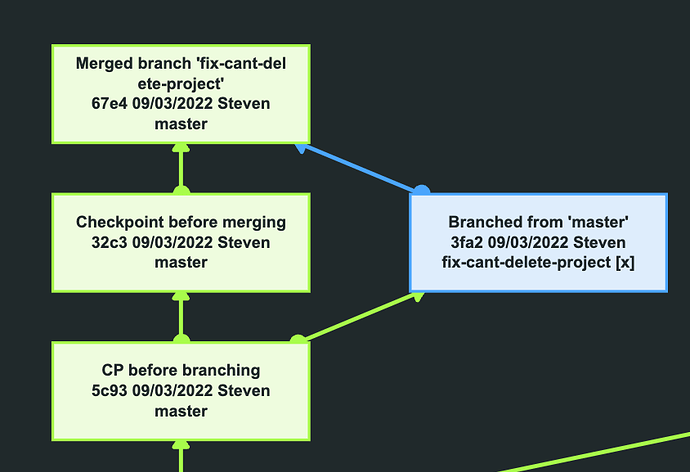 Thats amazing. Thanks a lot.

Ran into this bug as well, but the above fix worked great.

Steps leading up to bug:
1 - Launch window was running
2 - Created two entities “Lights” and “Geo” to clean up the hierarchy
3 - Dropped the lights under “Lights” and models under “Geo”
4 - Made an adjustment to the camera and saw that it wasn’t updating
5 - Relaunched the launch window and received the bug error

Thanks Katy, we will investigate to see if we can create a repro

I don’t suppose you remember the steps that led up to the issue? We are trying to reproduce the issue so that we can prevent it from happening and not having much luck

These are the notes about the process so far. Note that these notes aren’t mine, but I hope they are helpful!

Artist Notes of tasks performing:
I, the artist, was working a lot with lights and modular assets setting up a scene. These are a bunch of the things I was doing and working on when I encountered this unable to delete error.> duplicating modular assets around the scene

Templates
I tried r-clicking and making these groups into Templates (but I admit I didn’t know exactly what this did or how to best use this feature). I was trying to make the GRP I’d made, here in play canvas, into a template light group that I could instance and change one light and it would change them all.

our error was on the “Light_Set_6"
Cannot find child entity aafafe46-8576-47a8-af7f-7160e8a435a3 of parent “Lights_Set_6” (02b0c74d-c33d-4e70-a045-eefc863bf632)
(anonymous) @captureconsole.ts:73
in our cleanup merge exercise that fixed the issue it deleted the missing entity which was one of the duplicated spot lights under “Light_Set_6"> During all that I also Adjusted the lights to have different intensities and settings
some I adjusted one at a time
others I adjusted by selection all the middle spaced lights and adjusting their intensities all at the same timeAfter / during this lighting stuff I found that I couldn’t delete some of the other lights I had been using in the scene. So I tried deleting other stuff and could delete nothing from the scene.
I tried refreshing the browser with no avail.
So I made a new entity and renamed it DELETE and put all the entities I wanted to delete into that folder until I could ask the guys to help look at this issue the next day.

Other Errors Besides Deleting - also had trouble uploading fbx’s:
The next day around noon - I was also having trouble brining in new fbx’s into my Assets folders. Before fixing this delete error problem I had brought in 2 fbx’s and they both made a folder but I could not see them till I refreshed AND the folders were actually empty upon checking them.

Awesome, thanks for the info. I will try to repro the issue with it

Edit: Still can’t reproduce it at will

If anyone does find more patterns or ideas, please do let us know