In 2006 I invented the beginning of my own abstract thinking game with nuts and bolts. In 2012 I started working on the idea.

Because spending a physical game was not affordable and finding voluntary programmers proved to be an impossible task, I started learning programming myself.

Although others said it was not possible, I managed to connect two players and use my own laptop as a server. However, a WebGL build of Unity turned out not to be mobile suitable from which the switch to PlayCanvas became a fact.

I found someone who wanted to help me and with his help there is now a version of my game that everyone can play against each other. But because his time is up and I want to improve my game, I need some new help.

The project is perhaps a bit too complicated because we use HTLM, CSS and Firebase so that I can no longer make adjustments due to lack of knowledge of Firebase.

If you have some time, and like thinking games, invite me here for a battle so you can understand the game and maybe you can help to tweak it if you like. 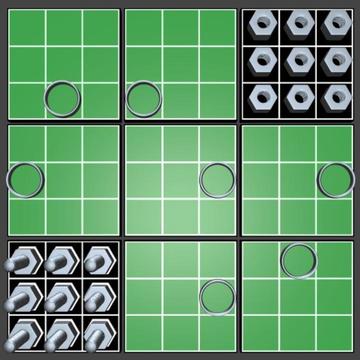 Sector is a new abstract strategy like chess and checkers. Move your soldiers, beware of enemies and capture the island!

I wish there would be bots, so I could play a game, if I have no friends

I can be your friend?

But yeah, maybe if I have enough skills to build that.

Hmm, is there a way to send a match invite? Or do I just keep the “Waiting for opponent” menu opened and wait for someone to open it too?

This are things I like to add in the future when I know how the Firebase is working.

For now you have to start a game with a friend or wait for a opponent if you have no friends.

Thank you for the match, @albertos. The game is nice and challenging! People who enjoy strategy would like it. Its a simplified mixture of chess and go, which I respect both.

Thank you for the great compliment! Next time you have to win! ^^