Script does not recognize sub elements

Hi Friends, I am using a script to change the texture of the diffuse, this script works fine on main elements but not on sub elements, what is wrong with the code?

This code finds the first entity in the root’s children that is called that name. My guess is that you have multiple entities with the same name.

You can either make them all unique or instead of using root, reference the parent entity first and call findByName on the parent to find a child with that name.

The other alternative is to reference the entity directly with script attributes.

The names are all different, I think the best is what you suggest “instead of using root, reference the parent entity first and call findByName on the parent to find a child with that name.”

Do you have a link to the project?

I have added you to the project

@yaustar Were you able to enter the project? I put it as public.
I keep testing codes, but how I do this? “reference the parent entity first” and later “call findByName on the parent to find a child with that name.”

Another example, if you do this.entity.findByName(), you will search among the children of the entity you are calling this script from.

This way parents may have children with the same name, and you would reference to the correct one. Otherwise, if you would search root for a child with a non-unique name, the search result may point to a child under some other parent.

ok i tried to do this but i see an error

Yes, check what the error says. The very first line on it.
ReferenceError: myYellow is not defined

You know its on lilne 16, so go there and see what’s happening. You tell the engine that you want to use an element property of myYellow variable. But you never told what that variable is, so it tells you myYellow is not defined, tell me what that is first. Well, not word by word, by you got the point.

HInt: you did define child variable, which you probably wanted to use instead.

I’m not making it @LeKKik
I feel like you’re almost telling me, but I can’t figure it out:
“you did define child variable, which you probably wanted to use instead.”

I don’t understand what it is the Yellow Variable

This is related to what I was talking about in the other thread: Change material properties with a button

myYellow has no value and not referencing an object. So you either have define it as a variable in this function and give it a value/reference an object or use another variable that has the reference to the object that you need to get the element from.

To further explain this, this line of code is saying:

On the object that myYellow is referencing, get the element object and call the on function.

Ok, I think this is closer, but it still doesn’t work. Follow the same error

I feel like I’m shooting blindfolded, if I succeed it will be pure luck

You give up too early

I will give an answer tomorrow, if you are still stuck by then.

Hint: myYellow is not defined, but child is

Yeap no problem @LeXXik, we continue tomorrow. I’ll keep trying. I have noticed that if I erase the line

the error disappears but does not change color, let’s say it does not work. From what I deduce that deleting is not the solution but to correctly complete the code.

Hi @LeXXik, I’m still stuck, I’ve tried many things and searched the API guide but I can’t find how to define myYellow as a variable in this function, therefore I haven’t achieved what @yaustar suggests "give it a value / reference an object ", I don’t know if I should add a line of code, if I should change some values in what is written, etc.

@LeXXik I have added this line to give myYellow a value but it doesn’t work, obviously it’s wrong and I don’t understand why

First of all, let’s get rid of your early bad habbits in syntax:

Now, about your problem. Lets refresh how we use variables first.

You must follow these rules with anything in Javascript, be it objects, properties, variables, libraries, JSON payloads. Remember them. If you skip rules 1 or 2 or both, and jump straght to number 3, the compiler will complain that the variable is undefined. You must start from rule 1.

Often it is verbose to write rules 1 and 2 on new lines, so Javascript allows to merge them into a single string:

But the order is still preserved - the variable is defined first, then it is assigned a value.

Can you tell by now where you problem is?

Perhaps, to fully open your issue, I could introduce you to a new concept - Javascript Objects. Well, its not really new. You’ve actually been using them all this time.

Say you want to create a character:

To make it more than just an empty blob of nothingness, you want to add a name to it and a language it speaks:

But now, those character treats are stored in their own variables, so you can’t simply pass character variable to some function. You would also have to send charName and language. But what if the char has dozens of properties? You can see how it quickly becomes hard to handle. Javascript objects are the answer.

A Javascript object is a simple collection of key:value pairs. Where you can name keys anything you want, and assign them any value, another object or even a function that returns a value. Pretty much anything, really. The objects syntax is to enclose the pairs in curly brackets { }. So, our character would look something like this:

Great, now we have a character, but how do we use it? How can I get that name, for example? Well, remember rule number 1:

We defined the variable and assigned a value to it. So, now our variable stores an object that describes our character. How do we get that name? Pretty simple - we use so called “dot notation” to access object properties. This should be familiar to you:

We can even extend it further:

Here we added another object with properties that describe the language LeXXik may speak. This is a very common and powerful method, which gives you an ability to create rich descriptions about an object. Now, instead of passing a dozens of variables, you can simply send a single character variable that stores the object.

Here is your code:

You broke the rule number 1 and 2, and straight went to number 3 by using myYellow variable without defining it or giving it any value. The variable myYellow is empty, and has no object inside, that would have a key with a name element. However your child variable does, and should be used instead:

Your child was properly defined and stores an entity object that was found by the engine:

So, when you run child.element.on(), the engine looks inside the object stored in the variable and using the dot notation finds the .on() method.

Thank you very much @LeXXik I am reading everything very carefully.

Hello @LeXXik I have reviewed everything and I think I have understood it, thank you very much, the error does not appear anymore but it still does not change color (I think it is a problem that the child button is linked to the parent button in root), basically when I press the yellow button “I drag” the beige button I leave you some screenshots so you can visualize
(Can you notice that when I pose above the red button, the beige button is also activated?) 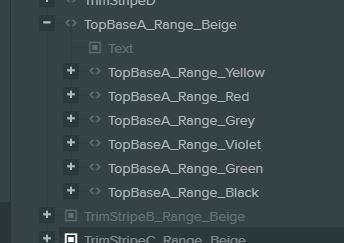 The corrected code with your suggestions (I cross my fingers that it is correct) :

pd: Thanks for your CamelCase advice, I’ll use it when rewriting this